Ideal solution after damage to the stationary processing plant

Failure of parts of a stationary plant? Luckily, Oswald Richter Beton und Recycling GmbH & Co. KG had a quick solution on hand. With the mobile cone crusher MOBICONE MCO 90i EVO2 and two mobile screening plants MOBISCREEN MS 953 EVO, the contractor crushing company in the east of Germany was able to quickly get production in a quarry back to full swing.

MOBICONE MCO 90i EVO2 as a fast and flexible alternative

As a substitute for a damaged stationary plant, a rapid, flexible solution was needed – the ideal application area for the Kleemann cone crusher MOBICONE MCO 90i EVO2. With the mobile machines installed here it was possible to maintain the production of grit for concrete production quickly and reliably.

Image on right: The cone crusher MOBICONE MCO 90i EVO2 is loaded with 16–45 mm feed material, which is crushed to the desired final grain size of > 3 mm. 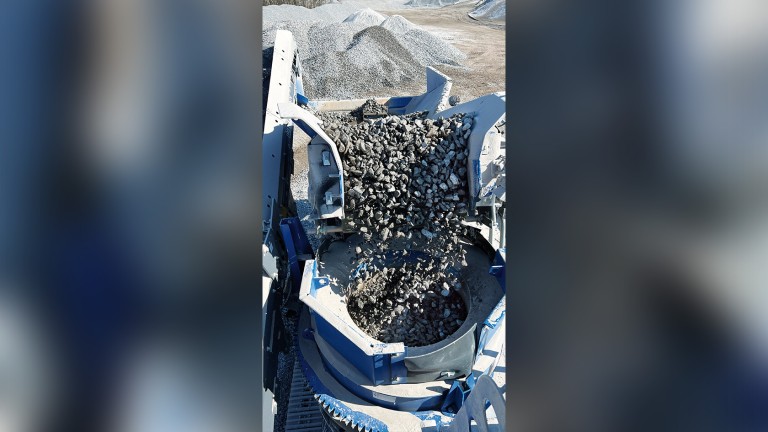 The aim was to crush the hard stone that was extracted in the quarry and which was crushed in the stationary pre-crushing plant to 16-45 mm into different target sizes – however, with a very special challenge: "One of the final products should be a size 1-3 grain", explains Hagen Schroth, proprietor of Oswald Richter Beton und Recycling GmbH & Co. KG in Colditz. "We were very curious to find out if we could achieve what the customer wanted because the plant is really not geared to these target products at all." Luckily the company could count on the competent support from Kleemann experts.

"The experts provide consultation on site with all of their experience and practical knowledge. The fact that we had access in this special case to so much specialist knowledge was unbelievably helpful."

Achieving the goal with concentrated expertise

Andreas Ludwig, Kleemann specialist at Wirtgen Germany, supported Hagen Schroth and the professionals in the quarry with setting up the plant. "The challenge was screening after the crushing stage with the cone crusher", said the expert. "We had to guarantee that 0–1 was removed completely from the 1–3 mm product. The end result was supposed to be perfect. And not only on dry days, but also in damp and windy weather conditions."

The perfect set-up: cone crusher plus two MOBISCREEN MS 953 EVO screening plants, as mobile plants, guarantee operation until the stationary plant can be put back into operation. The production of 1–3 mm grains places particularly high demands on the screening plants.

The experts theorised on many variants of screen media. After careful consideration, they decided on a covering that had already worked almost perfectly during the first test run in January 2022. "It was a complete success", as Andreas Ludwig happily reported, "we took a lot of time to closely examine the stationary plant that was still intact and considered a very large number of screen media and combinations. In the end, we decided on Varia harps - very special screens. The positive feature here is that moist sand does not stick to the thin stainless steel elements." Behind the cone crusher that produces the 0–16 mm grain, there are now two screening plants. On the first plant, fine 0–1 mm-dust is separated, then 1–5 mm moves on to the second screening plant where the remaining 0–1 mm material is screened once again and the separation 1–3 and 3–5 mm takes place.

Machine operator Adrian Hentze is very satisfied with the reliability and easy operability of the plants.

Good co-operation with a fantastic result

"We're really happy that the first analysis hit the bull's eye", says a pleased Hagen Schroth. The entrepreneur feels well looked after by Kleemann not only in this: "The experts provide consultation on site with all of their experience and practical knowledge. The fact that we had access in this special case to so much specialist knowledge was unbelievably helpful." He is also completely satisfied with the reliability and easy operability of the plant, above all, because his local team had relatively little experience with this task and such a plant combination. In the first two months, the cone crusher produces over 30,000 tons in 400 hours – a really impressive result. After this time, a tool change was also pending which was quick and easy thanks to the simple technology plus support by a fitter from Wirtgen Germany and helpful Kleemann training videos.