The comeback of a mega-event

Although the event date has been moved from spring to autumn 2022, the planning for Bauma 2022 is already in full swing. Due to the coronavirus pandemic, the decision was made to postpone the opening date of the industry show – the international meeting point and market hub – in order not to jeopardise its particular benefits.

For the Wirtgen Group, the industry’s leading trade fair has always reflected milestones in the history of the company. In its evolution from a newcomer to construction machine engineering to a global market leader with five strong premium brands, the company has always presented itself at the event as an innovation leader. With the acquisition by John Deere, the group finally established itself on the market as a major international player – a fact impressively highlighted by its appearance at Bauma 2019 with around 13,000 m² of exhibition space and 120 exhibits.

Bauma | A trade show of superlatives

Today, it is hard to imagine that the world’s leading trade show for construction machines, materials processing equipment, mining equipment, and construction vehicles and equipment actually began in a small way. The event was first staged in Würzburg under the name of the 1. Fränkische Bauausstellung (1st Franconian Building Exhibition) by publisher Karl Rudolf Schulte in 1949. In 1954, the show moved to the Theresienhöhe in Munich as the ‘Frühjahrsschau für Baumaschinen¨ (Spring Show for Construction Machinery), and 58 exhibitors presented their products and services on the 20,000 m² exhibition site. In1956, the name is officially changed to ‘Bauma’, and the first 13 exhibitors from abroad attend the show. From then on, the records with respect to the numbers of visitors, exhibitors, and the size of the exhibition space were broken from show to show – except in the 1970s, when they tumbled due to the crisis in the building industry.

In 1998, the show said farewell to the inner city site and became one of the first events to be held at the new ‘Messe München’ exhibition grounds in München-Riem. Today, Bauma is not only the industry’s biggest showcase event, but also the world’s largest in terms of exhibition space, and can boast extremely impressive statistics. 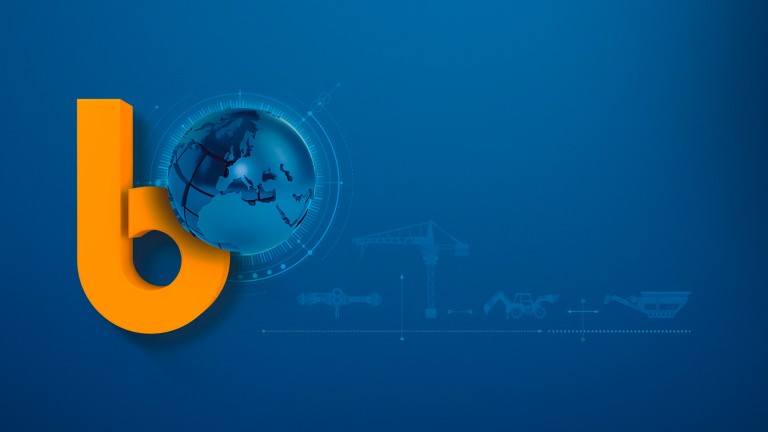 Statistics of the last four Bauma industry shows at a glance:
2019

The Wirtgen Group brands and their ‘Bauma-history’

Even before the Wirtgen, Vögele, Hamm, Kleemann and Benninghoven brands joined forces and became the Wirtgen Group, showing a presence at Bauma was an absolute must for each of the individual companies. The show was the venue for the presentation of impressive – and often pioneering – innovations, and making, refreshing, and cultivating important personal and business contacts. It was no coincidence that the booths of the five brands were generally placed very close to each other. This gave visitors to the events at that time the chance to see the entire road construction process chain in one place – even though the integration of the five brands into the Wirtgen Group was first finally completed in 2014.

While 1983 saw Wirtgen GmbH celebrating its debut at Bauma as a newcomer to the construction machine industry with five milling machines on show, the long-established Hamm, Vögele, Kleemann and Benninghoven brands were already able to look back on an impressive number of appearances at the show. We have compiled a selection of several milestones from these years for you here.

Selected highlights from the early days until the formation of the Wirtgen Group – our brands at Bauma over the years:

For Hamm, the Bauma story begins in 1954. The company from Tirschenreuth causes quite a stir at the first showcase event with their all-wheel-drive and all-wheel-steering tandem rollers.

The company presents a prototype of the first pneumatic tyre roller at Bauma 1965.

In 1983, Hamm presents the integration of oscillation as the latest innovation in compaction technology.

In 1998, Hamm presents the new HD series of rollers. The following year sees the merger with Wirtgen GmbH and the formation of the Wirtgen Group.

Kleemann is among the first exhibitors to appear at the ‘Spring Show’ held in 1954. Founded in 1857, the company began the production of its first mobile crushing and screening plants back in the 1920s.

At Bauma 1962, the company presents a wheeled crushing plant ...

... and a mobile sorting and crushing plant to the audience of industry experts

In 2004, Kleemann presents a range of products, one of which is the new MCB 122 Z jaw crusher. 2006 sees the merger of the company with the Wirtgen Group.

1965 sees the premiere of Vögele at Bauma with the prototype of the SUPER 204 and the start of serial production of a new and more stable levelling and compaction machine. The show also sees the market launch of the SUPER 200 as a tracked vehicle.

Developed in line with the latest technologies, the 475 HVA extending screed is technically far superior to what Vögele’s competitors offer and makes its first public appearance at Bauma 1977. From now on, this technical innovation will be fitted on all Vögele pavers.

In 1980, the company presents the SUPER 1500, SUPER 1502, SUPER 1700, SUPER 1704 paver models, and the SUPER 2000 with an extending screed. The number of international visitors to the booth confirms the enormous interest in Vögele products.

1986 – The new extending screed with a 2.5 m basic module and two 1.25 m extending modules is presented to the industry experts. With this version installed, a paver can achieve paving widths of between 2.5 and 4.75 m without any add-on components.

The 1990s saw the focus of public dialogue shift more and more to the reduction of emissions by means of innovative technologies. Vögele delivers a constructive contribution to this with the SUPER 1800 – world’s first road paver with a diesel-electric powertrain. The new paver impresses with outstandingly low environmental impact, high cost-efficiency, ease of handling, and exceptional paving quality. So it is no wonder that it won the 1995 Bauma Innovation Prize.

Benninghoven makes its first appearance on the international exhibition stage at Bauma 1977. The first exhibits shown are equipment for the asphalt industry such as burners, bitumen tanks, thermal oil heaters, a mastic asphalt mixing plant, and a mastic asphalt silo.

1992 – Benninghoven exhibits its first own mixing plant in Munich – the BA (Benninghoven Anlage).

The trend towards wheeled asphalt mixing plants that began in England and France has now been taken up and is presented for the first time in the guise of the MBA at Bauma 1998.

2001 – The enclosed construction of the first EBA containerised plant (with filler silos and elevator installed inside the plant) removes the need for exterior cladding and provides protection against dust, heat, and noise.

2004 – The highlight of this year’s Bauma appearance is the EMOB wheeled asphalt mixing plant – the entire plant is mounted on a single trailer. This year’s show also saw the premiere of the granulator for gentle processing of asphalt blocks.

2013 – Innovations like the lower-slung, transportable BA asphalt mixing plant or a containerised plant create a stir at the show. In the following year, 2014, Benninghoven becomes a part of the Wirtgen Group.

Wirtgen and the Wirtgen Group

Still under the name Wirtgen GmbH, the company makes its first appearance at Bauma with five milling machines.

The latest trend – rehabilitation instead of new construction. In 1986, the company presents itself to the specialist audience on an exhibition space of 1,000 m² and exhibits 18 machines – 6 of which are entirely new developments. Gisela und Reinhard Wirtgen, the company owners at the time, were joined at the show by twenty of their employees.

In the meantime, Joseph Vögele AG has been taken over by the company – the Wirtgen Group is now on the map. Both companies exhibit the highlights of their product portfolios. The overall area of the two-storey pavilion and an exhibition space for over 40 construction machines adds up to 5,200 m².

The first joint appearance with Hamm – the Wirtgen Group is now the first full-service provider in the mobile road construction machinery segment and presents a dazzling display of innovations and new developments on 7,700 m² of exhibition space. And the Bauma itself registers all-time records: In the meantime, it has become the biggest industry show ever staged in Munich.

As in 2004, the Wirtgen Group exhibits its complete product portfolio, including the new 2-series surface course pavers like the Vögele SUPER 2100-2 large paver or the smaller SUPER 1800-2. Wirtgen shows large machines such as the 2500 SM surface miner with a milling width of 2.5 m or the KMA 200 cold recycling mixing plant installed on a semitrailer.

The first joint appearance with Kleemann. The establishment of the business line Mineral Technologies begins a new chapter in the history of the Wirtgen Group.

4 brands, 9,080 m² of exhibition space, 75 exhibits, and technology pavilions for each of the brands – impressive figures, to say the least.

The most comprehensive presentation of the Wirtgen Group on 10,560 m² of exhibition space:

The era of new superlatives begins

Since the amalgamation of all five brands in the Wirtgen Group, records are broken from one Bauma to the next. To visually demonstrate the integration of the brands within the company group over the years, all five now appear at Bauma 2016 in a fresh, new corporate look. As the show’s second-largest exhibitor, the group shows 93 exhibits on a space of 11,712 m², 30 of which are making their first appearance at the show.

The Wirtgen Group makes its first appearance at Bauma together with John Deere with the slogan ‘SmartSynergies and Innovations’. Here, SmartSynergies stands for the optimal interaction and solutions expertise of Wirtgen, Vögele, Hamm, Kleemann, and Benninghoven – complemented by the synergies generated by being a part of John Deere. With 120 exhibits – including 18 world premieres, 25 innovations, and 6 interactive technology experiences – the 13,000 m² booth at Bauma was an irresistible magnet for visitors to the show.

Our appearance at this year’s Bauma was the most successful in the history of the Wirtgen Group and provided an ideal opportunity the successful market launch of John Deere motor graders in Europe.

Bauma premiere for John Deere– with a cross-section of the company’s construction machine programme , including motor graders distributed in Europe by German and French Wirtgen Group sales and service organizations. 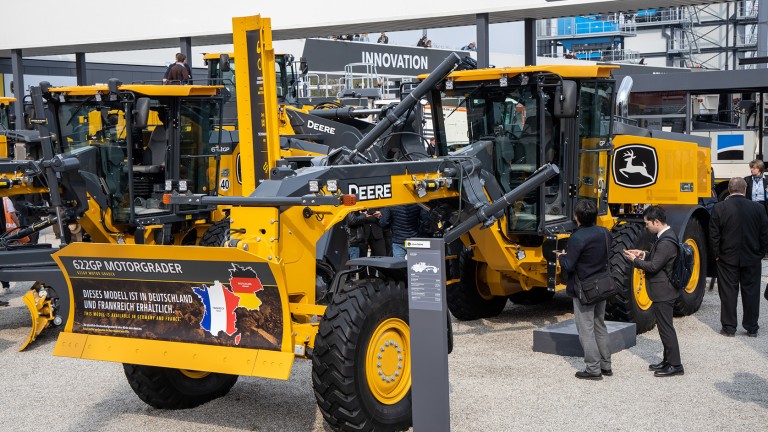 Our close connections with the Wirtgen Group enable us to present John Deere construction machinery to a wider audience from around the globe.