Spectacular finish during the construction of the Shanghai-Kunming Expressway

When reconstructing and expanding the Jinhua section of the G60 Shanghai-Kunming Expressway, the construction company contracted for the job, Zhejiang Jiaogong Hongtu Traffic Construction Co., Ltd., focused equally on quality and speed. Using 4 Vögele road pavers and 11 Hamm rollers, it was possible to successfully complete the required surface course work in just 5 days in November 2021.

With a length of 2.360 km, the G60 Shanghai-Kunming (Hangjinqu) Expressway motorway is one of the most important links between Shanghai and six provinces, including Zhejiang and Yunnan. Due to the economic and social development of the last 20 years, the road in the Jinhua section, which originally had four lanes, has reached its limits and is no longer able to handle the current traffic flow. The expansion to 8 lanes and, therefore, to a total width of 19 metres, aims to remedy this.

After more than a year of intensive construction, the project has now entered one of the final phases: Four Vögele SUPER 2100-3 L, ten Hamm tandem rollers HD 128 and HD 138, as well as one compact tandem roller Hamm HD 35 VV were used to reconstruct the surface course. The combination of Vögele pavers and Hamm rollers has already proven itself in many large asphalt construction projects – and the same is true for the reconstruction of the G60 Shanghai-Kunming Expressway. Here too, they impressed once again with their outstanding quality, reliability and efficiency.

The end result impresses thanks to its outstanding quality.

Wirtgen Group Machines in use

Surface courses made from stone mastic asphalt exhibit particularly high grip and crack resistance. Properties that make a crucial contribution to extending the road's useful life. At the same time, the requirements for the mixing, paving and rolling temperature are higher than for conventional materials. Since the temperatures must not fall below 160 degrees, a continuous material flow must be guaranteed for continuous and high-quality paving. The reliability and performance of the machines that are used are decisive here.

The SUPER 2100-3 L was equipped with a modified receptacle especially for the Chinese market. Thanks to the length of 2.42 m and the low feeding height of just 55 cm, mixed-material trucks can be positioned with no problems. Another benefit: The receptacle has a capacity of up to 15 tonnes – this offers plenty of space for the temporary storage of the material. These adjustments guarantee the continuous supply with material and a smooth, efficient paving process.

Stone mastic asphalts are subject to stringent temperature requirements not only when paving but also in the pre- and re-compaction. This also affects the efficiency and performance of the rollers. The 12 and 13 t tandem rollers in the Hamm HD series handled the tasks in a masterly fashion and achieved a high level of compaction quality.

The fleet of rollers from Hamm guarantees a spectacular overall impression

The fleet of rollers from Hamm – a total of eleven – followed immediately behind the pavers and guaranteed a spectacular overall impression. There was a good reason for using the rollers directly behind the paver because the objective is to reduce the time required for pre-compaction to a minimum in order to achieve as high a temperature as possible for the subsequent compaction. Thanks to the combination of paver and roller, it was possible to achieve an optimum and fast compaction of the surface – in just 5 days.

In order to compact the surface as quickly as possible and to benefit from the high temperature during the pre-compaction, the roller follows immediately behind the paver.

The HD 35 VV compact tandem roller was used to compact smaller surfaces and edge areas. One advantage of the HD 35 VV in this application: The track offset is 50 mm (right) and is especially suitable for compacting alongside kerbs because the driver only has to pay attention to one drum while the other drum runs at a specific distance from the kerbstone and cannot come near it. 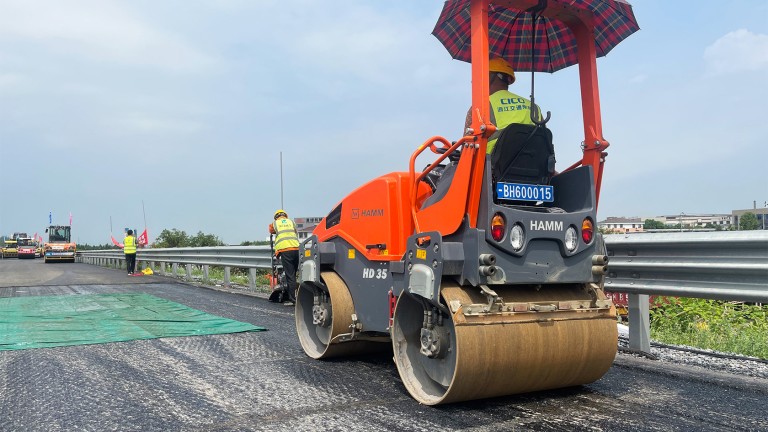 "Vögele pavers and the Hamm rollers were combined here in accordance with the "1+1>2" effect and impressed once again thanks to their outstanding quality, reliability and efficiency."

Methodically and perfectly harmonised with each other

The entire construction process impressed thanks to a well-conceived cooperation, high level of efficiency and outstanding quality in the end result. As a result, it was not only possible to achieve the required thickness of the surface course of 4 cm quickly and extremely efficiently, but the degree of compaction and the longitudinal evenness of the road surface was also able to meet all of the requirements. In the future, optimum driving comfort will be guaranteed on the Shanghai-Kunming Expressway.

As drivers of innovation, Wirtgen Group's objective is to use continuous further development of their plant and machinery to offer customers solution-optimised results, while simultaneously increasing efficiency and reducing costs. The cooperation between the Wirtgen Group brands and the use of synergy effects during the planning and construction, right through to the application, pays off on the construction site and makes the process particularly cost-effective.