The main carriageway was even handed over ahead of schedule

The Shenghui South Road is one of the key north-south arteries in the urban road network of Yuncheng in Shanxi Province. To renovate an approx. 4.9 km stretch of the road, the construction company contracted for the job, Shanxi Yuncheng Titong Construction Group, put their faith in the high standards of efficiency and quality of the Wirtgen Group. The carriageway could be handed back as much as three days ahead of schedule.

Yuncheng, situated in the north Chinese Province of Shanxi, is best known for its saltwater lake, often called China's Dead Sea. The city has a long-standing tradition of mining the famous Xie salt – and the lake has become a very popular attraction among photographers owing to its dazzling display of colours.

One of the key arteries through the city is the Shenghui South Road, stretching around 5.0 km through the city of 4.7 million inhabitants. It starts in the south at the salt and chemical plant of Yanhua Second Factory and ends at the vast statue of General Guan Gong.

The city's construction management team made extremely high demands of the contractor. Which is why the Shanxi Yuncheng Titong Construction Group needed construction machines that they could rely on to not only ensure high construction quality but also to work ultra-efficiently. By using machines from the Wirtgen Group – Wirtgen milling machines, Vögele pavers and Hamm rollers – the company made the perfect choice to fulfil all the requirements on time and to specification. 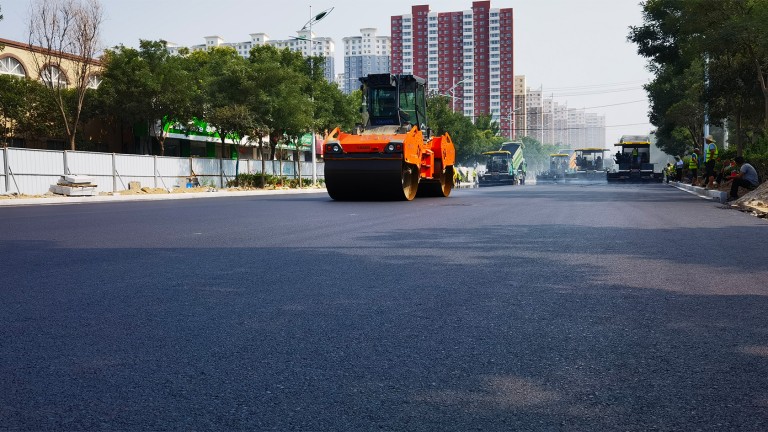 High demands on the construction process

Every aspect of the city administration's requirements for evenness, durability, resistance and, not least, the request for a dark black road surface was successfully met. In particular, it gave the pavers from Vögele an opportunity to display their prowess. Hot-on-hot, the innovative method for two-layered application of asphalt paving in a single operation, guarantees the optimum interlock between the binder course and the surface course, increasing the stability of the surface and extending the lifespan of the road. The method has undoubtedly proven itself on the Shenghui South Road. An improved asphalt mix and high paving temperatures ensure an optimum degree of compaction.

To achieve a consistently even street level, the contractors used four SUPER 1880-3 L and SUPER 1880 L type Vögele pavers designed specially for the Chinese market. Used in combination with fixed-width screeds and extending screeds, they guarantee non-stop, seamless paving of asphalt layers. The benefits of the fixed-width screed of type SB 300 HDT and the extending screed of type AB 600 can be combined to achieve perfect results. While the fixed-width screed provides maximum road evenness and compaction power, the extending screed is particularly flexible and can be adjusted to the required widths – up to 9.5 m in the same quality. This well-balanced interplay between flexibility, evenness and pre-compaction was an important assurance of quality for those responsible for the renovation. 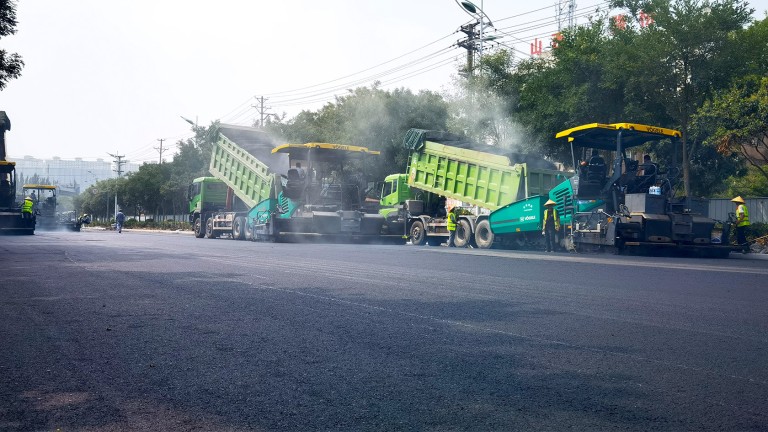 With a drum width of 1980 mm, a maximum working width of 2080 mm, two vibrating roller drums and centrifugal forces of up to 186 kN, the HD 128 tandem rollers, produced specially for the Chinese market, are the ideal machines for achieving a high surface output in a short time. The results speak for themselves: Anyone driving along the Shenghui South Road from Hongqi West Street to the salt and chemical plant at Yanhua Second Factory will notice how perfectly even the road is and will know that the road was paved and compacted with care and quality. The dark and even road surface slots seamlessly into the cityscape and provides a comfortable and enjoyable driving experience.

Forming part of the city's regeneration initiative, the renovated road has proven a huge success and meets every requirement set by the local authorities. Each phase of the project was accompanied by constant quality control checks from the supervisory authorities, who meticulously inspected every step of the process – right from the raw materials and all the way through the individual completed stages of construction. The project could not have been finished so efficiently and to such a high standard without the dedicated work of all the employees.

Not just fast but ahead of schedule