What surprised residents, the municipal authorities and construction engineers was just another job for the cold recycling experts from Danish contractor Arkil A/S. In fact, everyone involved was seriously impressed. The cold recycling train of the Wirtgen Production System centred on the W 380 CRi rehabilitated and widened the Sinding Hedevej near Silkeborg in a single pass. The project turnaround time could hardly have been much faster. It took Arkil A/S only four days to complete the new base layer and reopen it for temporary use by traffic.

In comparison, conventional asphalt paving would have involved milling off the entire road surface in several stages and then widening and repaving the roadway from the ground up. In-place cold recycling eliminated all these separate steps. Foamed bitumen and cement were added to the existing asphalt material and processed in-place to produce an as-new BSM base layer. The old road surface was milled off by the W 380 CRi to a depth of 15 centimetres. Around 300 t of material per hour were transferred to the Vögele SUPER 2100-3i paver next in line, which laid the new pavement profile with a width of 5.5 m and a depth of 12 cm, all in a single pass. The cold recycling train worked at a speed of 4 m/min along the 3 km section of the Sinding Hedevej. As soon as the Hamm rollers had taken care of the final compaction, the road was able to be temporarily reopened for local road users. 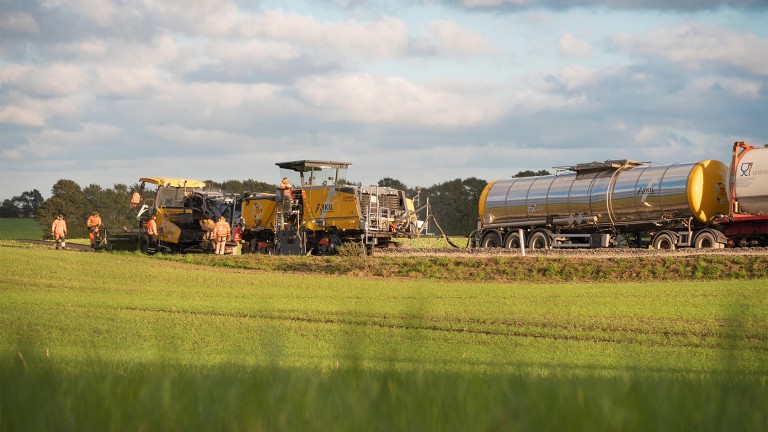 Characterised by its particular versatility and durability, BSM has become a proven paving material on decades of projects around the globe. Considering the required minimum thickness for a sustainable BSM base layer of 10 cm, the 12 cm layer laid here is in the green.

‘Essentially, cold recycling is suitable for the rehabilitation of all kinds of roads. It was particularly good here, as no material had to be moved to or from the site and we were also able to widen the roadway in a single pass. And that seriously reduces our carbon footprint.’

According to Arkil, the costs of cold recycling were 30 percent lower than for a conventional rehabilitation project. In fact, the municipal authorities in Silkeborg were so impressed that they are already planning the next road construction project with the cold recycling method.

Conservation of resources by cold recycling

Materials played the biggest role in the reduction of overall project costs. In the cold recycling method, considerably less bitumen needs to be added as a binding agent than would be required for the production of new asphalt mix. This is made possible by the foamed bitumen technology from Wirtgen. Hot bitumen was delivered to the site and automatically injected in-place – i.e. during the milling and mixing process – with the Vario injection bar. Thanks to process-dependent machine control, the feed volume was matched to the travel speed of the machine and ensured the homogeneity of the mix transferred directly to the SUPER 2100-3i paver.

Another advantage: the final surface layer can be paved thinner than usual. In this case, a 3 cm surface layer was paved with the high-quality material, instead of the 4 to 5 cm generally used. This also reduced the construction costs.

Further costs were saved by the reduction of the site logistics required. The recycled area of over 12,000 m² produced almost 4,000 t of material that didn’t have to be removed from the site. Assuming a load of 20 t per vehicle, this is equivalent to around 200 fewer haulage movements for material disposal alone.

The W 380 CRi processes the perfectly pre-milled and prepared material.

In the down-cut process, the milling and mixing rotor mills off the old road surface and mixes the material with water and foamed bitumen.

Transfer of the BSM mix

The discharge conveyor transfers the homogeneous BSM mix directly to the paver’s hopper.

Spreading and true to grade and slope paving

The paver takes over from here, spreads the material and paves the new layer across the new roadway width of 5.5 m true to grade and slope.

Here, in-place cold recycling recommended itself as the most suitable construction method for the job. The ability to recycle 100% of the existing construction material in situ played a decisive role in assuring the sustainability of the construction site. Two factors in particular enabled a significant reduction of CO₂ emissions: firstly, the elimination of a calculated 400 transport movements of material to and from the site and, secondly, a considerable reduction of the 3,800 t of fresh hot-mixed asphalt that would have had to be produced for the base layer.

According to Arkil, these factors enabled an up to 70% reduction of the overall CO₂ emissions.

Paving the BSM base layer

The Vögele SUPER 2100-3i paved the finished BSM base layer for final compaction.

A Hamm DV+ 90i VV delivered the required degree of compaction and ensured optimum surface protection.

As an additional quality assurance measure, Arkil checked the compaction performance immediately after the first passes of the roller to ensure the durability and long life of the paved material.

Win-Win Situation for the Environment and the Municipal Coffers

Cold recycling with foamed bitumen is a technology that brings real advantages on every road rehabilitation project. Whether for in-place rehabilitation, as here with a CR-series cold recycler, full-depth recycling (FDR) through and below the base layer with a WR-series wheeled recycler or decentralised mixing of new BSM mix in a KMA 240i cold mixing plant, foamed bitumen technology always delivers extremely durable BSM mixes for a more sustainable road construction process chain. No matter which cold recycling method is chosen, users can always look forward to a considerable reduction of their carbon footprint and lower overall costs for primary resources.

The advantages of cold recycling with foamed bitumen have been impressively confirmed on numerous projects around the world, and the method has long since become a standard practice in the road construction industry. Only the basic situation on the project site decides which equipment should be used for the production and processing of the mix.

‘We’ve been working with Wirtgen Group equipment for quite some time. The machines are reliable, easy to maintain and deliver maximum productivity.’

Each strip was pre-milled to a width of 1 m and a depth of 15 cm before cold recycling.

The entire milled material is deposited in the track of the W 380 CRi and completely recycled. Here, this avoided the need to move around 400 loads of material.

Precisely 1% cement can be added directly to the deposited material as an aggregate for the BSM base layer.

Road surface milled to a depth of 15 cm.

The new BSM base layer is produced from the old surface layer and parts of the base layer. Recycling to a width of 5.5 m in a single step.

Paving in a single pass

A great team for service and quality